I wrote parts of this post after our last monthly assembly at Athens Hackerspace. Most of the hackerspace operators are dealing with this monthly meeting routinely and we often forget what we have achieved during the last 5 years and how many great things this physical space enabled to happen. But this post is not about our hackerspace. It's an effort to distant myself and try to write about the experience of running a hackerspace.

Yes, it's a community

The kind of people a space attracts is the kind of people it "wants" to attract. That sounds kind of odd right? How a physical space can want anything? At some point (the sooner the better) the people planning to open and run a hackerspace should realize that they shape the form of the community to occupy and utilize the space. They are already a community before even they start paying the rent. But a community is not a random group of people that just happen to be in the same place. They are driven by the same vision, common goals, similar means, etc. Physical spaces don't have a vision. A community does. And that's a common struggle and misconception that I came across so many times. You can't build a hackerspace with a random group of people. You need to build a community first. And to do so you need to define that common vision beforehand. We did that. Our community is not just the space operators. It's everyone who embraces our vision and occupies the space.

There is a guilt behind every attempt to go political. Beyond the dominant apolitic newspeak that surrounds us and the attempt to find affiliations in anything political, there is still space to define yourself. It's not necessarily disruptive. After all it's just a drop in the ocean. But this drop is an autonomous zone where a collective group deliberately constructs a continuous situation where we challenge the status quo. Being not for profit is political. Choosing to change the world one bit at a time, instead of running another seed round, is political. Going open source and re-shaping the way we code, we manufacture, we share, we produce and in the end the way we build our own means of production, is political. Don't hurry to label it. Let it be for now. But it's a choice. Many spaces have chosen otherwise, operating as tech shops or as event hosts for marketing presentations around new commercial technologies and products, or even running as for-profit companies, declaring no political intention. These choices are also political. Acceptance comes after denial.

You'll be tempted to define many ground rules on how you want things to operate. Well, I have two pieces of advice. Never establish a rule for a problem that has not yet emerged. You'll create bigger frictions than whatever problem you are trying to solve. Always prefer principles over rules. You don't need to over-specify things. Given the trust between the people of a hackerspace there is always common sense on how a principle applies.

All hackerspaces should have an assembly of some form to make decisions. Try to reach consensus, through discussion and arguments. There will be cases where a controversial matter can be hard to have an unanimous decision. Objections should be backed with arguments, otherwise they should be disregarded. Voting should always be the last resort. Remember, the prospect of a voting at the end of a discussion kills many good arguments in the process. Consensus doesn't mean unanimity.

Some call it lazy consensus. If you have an idea for a project you don't need permission. Don't wait for someone else to organize things for you. Just reach out to the people you want and are interested in your idea and start hacking.

You'll find many approaches here. We decided to keep it simple and most importantly to stick on a positive language. Describe what's an accepted behavior inside your community, instead of stating all behaviors you find wrong (you'll miss something). Emphasize excellence over Wheaton's Law. "Be polite to everyone. Respect all people that you meet at the space, as well as the space itself.", is what we wrote on our frontpage. It may not be stated explicitly, but any form of discrimination is not an accepted behavior. Being excellent to everyone means that you accept the fact that all people are equal. Regardless of nationality (whatever that means) or sexual orientation, you should be polite to all people.

This is my favorite word when it comes to hackerspaces. I'm sure most people reading this are familiar with Free Software and its four freedom definition. Let me remind you one of the freedoms:

The freedom to study how the program works, and change it so it does your computing as you wish (freedom 1). Access to the source code is a precondition for this.

Hackerspaces are community-operated physical places, where people share their interest in tinkering with technology, meet and work on their projects, and learn from each other.

So again the important thing here is that you tinker/hack things. Many people have misinterpret this into thinking that since there is no mention of Open Source or Free Software in that definition then these things are not important. Again, these are the requirements. In order to hack something, you should be granted the freedom to study and change it. Access to the source code is a prerequisite for this. For those who prefer graphical representations: 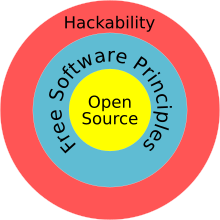 Mind the "principles" next to Free Software, since we are not just talking about software here. This also applies to hardware (hack beaglebones, not makey makey), data (hack OpenStreetMap, not Google Maps), content (hack Wikipedia, not Facebook) and of course software again (teach Inkscape, not Illustrator).

Sharing your knowledge around a specific technology or tool freely is not enough. Actually this notion is often used and more often abused to justify teaching things that nobody can hack. You are a hackerspace, act like one. All the things taking place in a hackerspace, from the tiniest piece of code to the most emblematic piece of art, should by definition and by default be hackable.

I hope it's obvious after this post that building and running a hackerspace is a collective effort. Find the people who share the same vision as you and build a hackerspace. Don't wait for someone else to do it. Or if you are a lucky, join an existing one that already runs by that vision. It's not that hard. After all, the only thing we want to do is change the world. How hard can it be?